skip to main | skip to sidebar

New kit and a sale

My second kit is now completed. Want a peek? 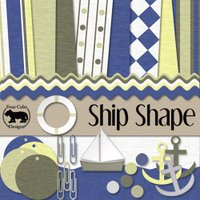 I also learned how to do sales tonight, thanks to Wendy! I've been working hard on getting all of my scrapping and kits done.

My secret that I was having to keep under wraps can now be told! I am now on the CT for a new site: Scrap2Basics. I was so excited when I found out! It looks like it is going to be a great store and board! You should definitely check it out. :)

Ok, Im off to get some work done before heading to bed. Happy Thanksgiving everyone!
Posted by Melissa 2 comments:

Woohoo! I finally have my very first product up at SBP. I am SO excited! Here is a preview for you: 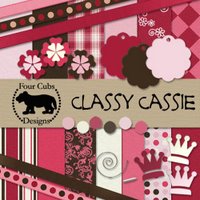 It is named after my sweet little Cassidy. I love the colors in this one. It actually is the second kit I made with the intent of hopefully eventually selling, but once I finished this one, it quickly got moved to number one status. My plan is to have at least one kit named after each of my little cubs. ;) I already have the color swatches chosen and am working on them as I get the chance.

I am super excited and motivated now!
Posted by Melissa 2 comments:

News, a trip, and more news!

Goodness. I wasn't kidding when I said I might have news in a few days. Of course, the news I thought I was going to have became something COMPLETELY different than I thought it was going to be. I'll try to catch up and yet keep it brief...

Ok, I will begin with my fun trip. My mother, MIL, brother's girlfriend Mel (also named Melissa, but spelled differently), and I all headed to Disney World on Monday for a girl's day out. We had a blast! Nothing like going to "The Happiest Place on Earth" without any kids or men. Ahhh! It was a long but relaxing and much needed trip. We even got to see Captain Jack Sparrow in action. LOL The guy had all of the mannerisms down to a science. He was great! We ended the day with the fireworks, which were beautiful!

Now to explain my first paragraph...

When I said I was going to have some news, I was speaking of a collaborative kit I participated in at Scrappin' Secrets in which all proceeds would go to Toys for Tots. Well, I think it was about a day later when I learned that SS will be merging with a larger site - Scrapbooker's Playground. This unfortunately put our kit on hold.

In the meantime, one of the designers, Wendy of Neverland Scraps, had seen my contribution to the charity kit, and behind the scenes was talking me up without my knowledge. I was urged to put in an application as a designer and the wheels have been turning ever since. What a whirlwind! I just finished my first it, but I'm not quite ready to give the sneak peek yet. You'll just have to keep checking back for it. LOL I will tell you it has a boyish feel to it though. :)

On top of that, I learned today of yet another secret involving me in the scrapping world. I can't tell anyone yet though! Heehee! I am so bad with secrets. It's a good one, and I can't wait to share it!

So, would you like to see a few LO's? 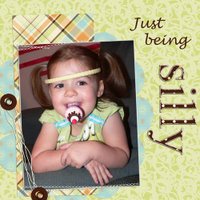 I have no idea what Cassie was thinking, but she was definitely in a goofy mood the day that we took this photo. She was wearing her hair in pigtails and decided to put a headband on as if it were a sweatband. And to top it off she would stick a plastic ice cream sundae in her mouth and just grin. Little nut. LOL I used Bella Gypsy's "Zen Calm" kit. 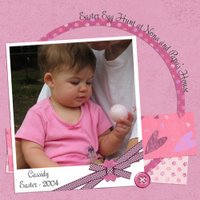 This was Cassie in 2004 at her first Easter egg hunt. She was too cute with the eggs. I used Bella Gypsy's "Glitz" kit on this one. I thought it went perfectly with the photo. 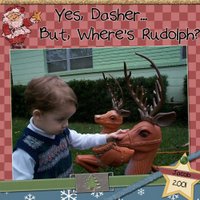 Man, this photo seems like it was taken ages ago, and yet it doesn't really seem like it has been that long. This is Jacob in 2001. My grandparents would put out these reindeer each year that were pulling Santa in his sleigh. Jacob loved them! The expression on his face in this photo was too cute. :) I used Pamela Gibson's "Country Christmas" kit. 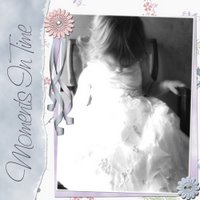 I love this photo of Elena. I took it in front of our front door..she was wearing a beautiful fancy dress and she was fascinated with it. The lighting wasn't great, the door has all sorts of scratches and the typical grooves. I decided to play around with the photo a good bit and it turned out so pretty, I think. I got rid of all of the grooves and scratches, got rid of the color and played with the lighting, and what you see is the end result. The kit I used in this LO is Kathryn Mhire's "Field of Flowers".


Ok, enough show and tell from me tonight. I need to get some sleep!
Posted by Melissa 2 comments:

This year seems to have flown by. I have no idea where the time has gone! Silas had this great New Year's resolution to get the garage cleaned out. We cleaned it out partially, but it is far from being completely done. It has been so nice out lately, and I am loving the chill in the mornings and evenings.

School is going great. Josh truly seems to have a grasp on his letter sounds now. I figured he would by Christmas. He is doing awesome! Jacob has given little trouble this week, so it has been nice getting through the work this week.

Halloween was fun. We went to my grandfather's place and et them "trick or treat" for him to see them dressed up. He loved it. We stayed for a while just visiting. We eventually headed out to the fall festival at the kids' art class. They were pretty much the only young ones to show up, so Ms. Julia was disappointed. However, they played the games and she helped them make a Halloween lantern that turned out super cute. Joshua was very unhappy about the craft and would not participate, so she made his while demonstrating for me to help Cassie and Jacob. After that we headed to my parents' house so they could TOT there and at Ms. H's house. Once Silas met us there, we took off to one of the local churches to do "Trunk or Treat". That was really cute, and the kids had a blast going from car to car and seeing some of the adults in costume. And my in-laws came over there as well. So, it was a packed day, to say the least!

Melissa G announced this week that had to step down from designing. I am so sad for her, because she is really good and I really enjoyed being on her team while I had the chance. When I found out, I went searching for another team and came across a call for Pamela Gibson (at Digital Freebies). I was pleasantly surprised to find out I made the team! Woohoo! Her designs are really nice, and I already made my first LO for her using her "Upon an Autumn Eve" kit. 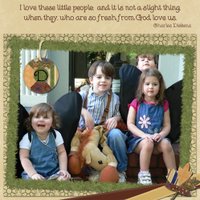 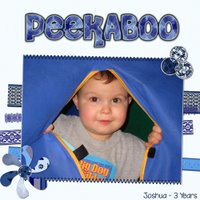 I also found out I was chosen as yesterday's Layout of the Day at Gotta Pixel again (November 1)! I was really excited! They even gave me a cute little blinkie to use. LOL

Isn't that neat?! I used Phoenix's "Indian Dreams" kit. Love the colors in that one!


There is so much more I could show you if I had the time. Right now I need to go and feed my kids some lunch. I will have a pretty cool scrapping tidbit for you in the next day or so. :)
Posted by Melissa 4 comments:

Giveaways of the Day